The Walking Men on the move 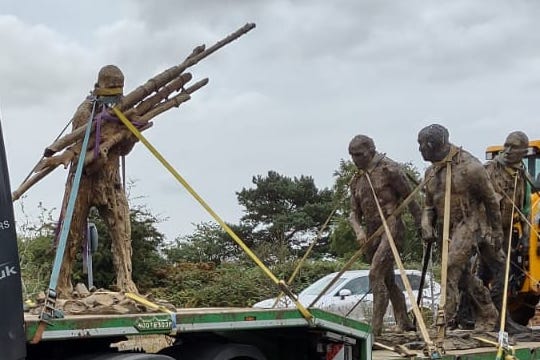 We were amazed recently to see some spectacular, tethered bronze figures on the back of a transporter near Snape church.  The photos show them “in captivity” on the transporter, and also roaming free in their natural environment.

The figures, called The Walking Men, are part of a set of five bronze eight-foot men, made by Laurence Edwards and cast at his foundry in Halesworth, where he and his team also cast the 26-foot Yoxman, viewable from the A12 at Yoxford.  [Laurence is Ilse and Alan's son.]

The sculptures were caught in transit between The Maltings, where they had resided for the Festival [and shown there below], to Messums Wiltshire which is a leading gallery and arts centre.  They'll be exhibited amid other works by Laurence in a vast ancient barn in Tisbury.  A wonderful book has been published to accompany the exhibition — and you can see Laurence’s  Instagram page @laurenceedwards.bronze for more information.

The exhibition at Tisbury will continue until October 16th, at which point they and other sculptures will be shipped to Australia for a big Museum Show in the Orange state museum, a beautiful new venue north of Sydney and the Blue Mountains.

Previous: Cost of Living Support in Suffolk
Next: Glass Collections