Dear Snape Resident (whether you're a GreenSnape member or not),

Some of you have already written in response to National Grid Ventures' initial proposals for its Nautilus Interconnector project.  These include a proposal to build the onshore converter station opposite Snape church.

Time is running out.  Kwasi Kwarteng, Secretary of State for Business Energy & Industrial Strategy has until 6th January to make his decision on the applications made by Scottish Power for its EA1N & EA2 windfarms.  These applications include a new National Grid hub which would result in at least 6 other projects connecting in this area, all requiring converter stations.  The first of these would be National Grid’s Nautilus followed by its Eurolink interconnector project.  If the Scottish Power projects were to be approved, it would be almost impossible to stop the major industrialisation of our area that would follow.

Before the decision is made, we are asking you to write to Kwasi Kwarteng as soon as possible before the Christmas recess on 16th December — you can view the suggested wording for a letter to Mr Kwarteng below.

We are asking the Secretary of State to recommend a 'split decision'.  This would mean the offshore elements could be consented so offshore turbine installation can commence without delay, while the proposed onshore infrastructure proposals would be rejected so full consideration can be given to finding a less damaging grid connection solution.  We attach a suggested letter template but please use your own words to say how you feel about these proposals.  We are very supportive of wind power but believe the unnecessary large-scale industrialisation of our area is too high a price to pay when viable alternatives exist.

Many thanks and best wishes,

You can download our text above by clicking here.

You can download the suggested wording below by clicking on it. 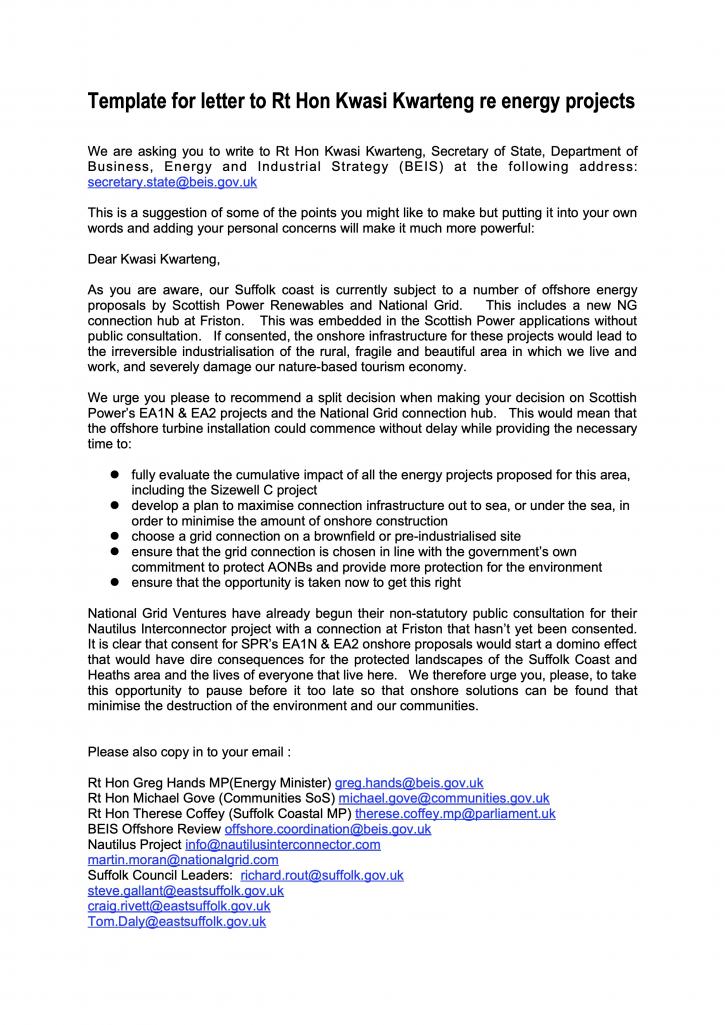